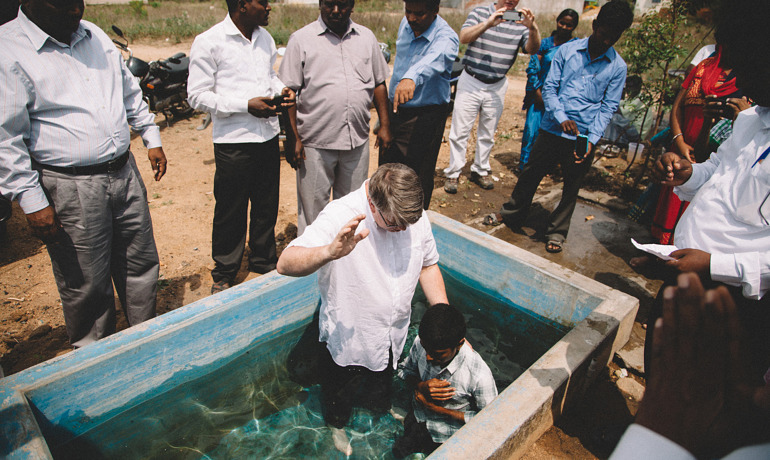 Ever since high school, Larry knew exactly what God was calling him to do, and he has spent his life devoted to missions. He’s been on several mission trips. He has missionary friends. He has supported missions, preached missions, and prayed missions. Larry is a man on mission. He loves the ordinary stories of regular, everyday missionaries just living their lives in their community, whether it’s here in the States at a church down the road, or across the ocean in a jungle or the desert. Larry knows all about unreached people groups and statistics. And he knows what God has to say about those unreached people:

There are many, many incredible stories about missionaries. George Mueller ran an orphanage and trusted God fully to care for their every need. They once sat at the table without any food, then suddenly a baker arrived with enough for everyone to eat. Just then, the milkman broke down in front of the orphanage and had all this milk that would spoil, so he gave it all to the orphanage and fed 300 children. Larry told such a story of his own that just about rivals that of old George.

In 2008, Larry went with a team of missionaries to southern Sudan. There was a people group of about 500,000 with no known Christians. They had no access to the Gospel, and they were difficult to physically get to. The team went to Nairobi, and from there met up with a missionary aviation plane at a small airport in Ethiopia where they flew to southern Sudan. The pilot circled the village where the people ran out with branches in their hands, incredibly excited to see a race of people they had never seen before. Larry’s team had no idea what to expect. Other missionary stories that started like this didn’t end well. They had a contact through UNISEF, an Englander who had a compound near the village who invited them to stay with him. The team prayed for someone who would be able to speak the language. In that part of the country through, there are many different dialects within a language, and they needed to communicate in their specific dialect. They didn’t have a Bible written in that language, so they had to figure something else out.

As the team prayed, a group of Ugandan bicyclists came into town right by where they were staying. They were actually non-believers, but they spoke English and the specific dialect in the language the missionaries needed to communicate to the villagers. Both groups went together to witness to the people in the village using an Evangecube, a way to communicate Bible stories visually. After a week of witnessing, the Ugandans left, but the team was able to connect with a Bible college in Uganda who also spoke the language and dialect and were able to step in and help. An older man in the village they had been talking to told Larry through a translator, “I know there is a God. But I have never heard of Jesus.” This is what broke Larry’s heart.

There are hundreds of thousands of people with all kinds of different languages, and none of them have ever heard of Jesus. But how can they, unless someone is sent? Unless someone goes? But where then do they go?

Larry knows people all over the world need to hear about Jesus. But he also knows our mission field isn’t necessarily across an ocean and in the bush of southern Sudan. Not everyone can travel that far. Not everyone is called to that specific type of missions. As believers though, we are all called to missions. The thing about being a Christian is that we don’t have to wonder if we’re called because Jesus says we are. Jesus told us to make disciples wherever we go. Wherever we live and work and learn and play, there are people who need Jesus.

Do you pray for people to know Jesus? Do you seek out opportunities to be the one to share the good news with them? After all, how else will they know if no one will tell them?

“Therefore, go and make disciples of all nations, baptizing them in the name of the Father, and of the Son, and of the Holy Spirit, and teaching them to obey all that I have commanded you.”